DONE!  It's such a great feeling to create something from seemingly useless bits.  About a month ago,  Jennifer issued a challenge on her blog. I really liked the idea of using some of my scraps, seeing as though they were everywhere at the time!  I organized them a bit according to colour, and got to work. 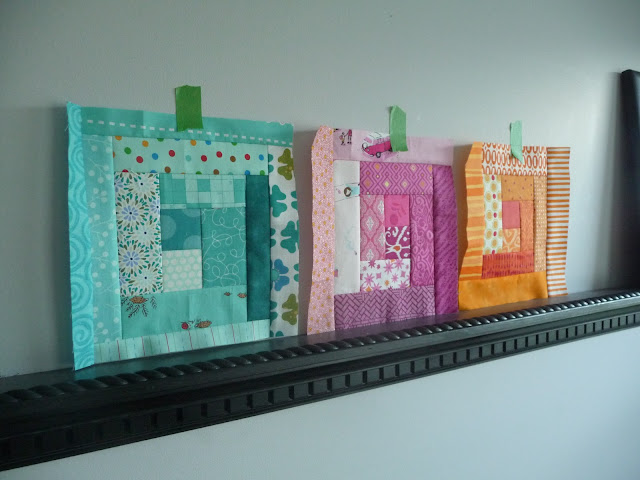 Once I got started, I had so much fun. Some nights it was hard to stop! 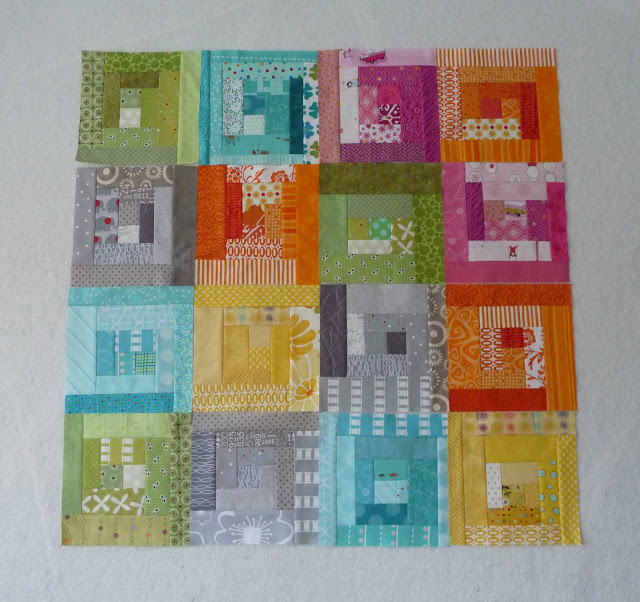 We needed a minimum of 30 blocks so that's all I did.  If I had more time to devote to this, it would have been much bigger.

Seeing as though I was on a scrappy kick, I fused two leftover pieces of batting together, and the backing was a flannel from my stash. Woo Whoo! 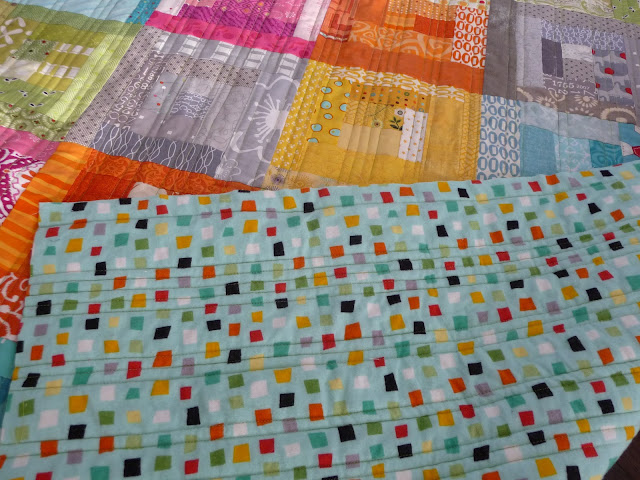 The binding (also stash) is an orange called 'fizz'. I treated this quilt to some straight line quilting at random widths. 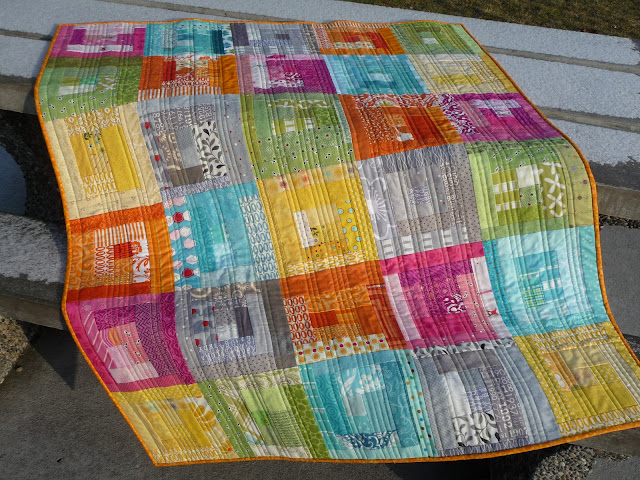 Yes, that's snow on the table.  It looks like summer, but it was -7 when I took these pictures. 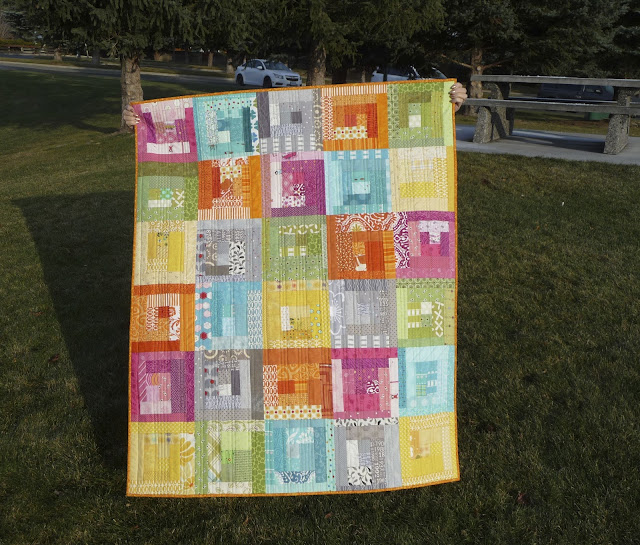 Linking up with Ellison Lane quilts
Posted by Carla at 6:17 AM

Looks great! I especially love the way you quilted it!

I love that you added in the grey, too. Adds a bit of sophistication to the rainbow!

oh I like this alot! Good going with the scraps!

Love the color combo and the simple line quilting.. it was fun and stress free making these quilts... great job.. popping over from the linky party and my email.. have a good day !

I am just loving all these scrappy log cabin quilts :) Love the quilting on this one!

Carla, your quilt is fantastic! I love all the colourness and how you have arranged your blocks 'randomly' (I know you have thought carefully how to order them). x Teje

Very nice and how great to do a little stash busting.

This is really cute. Way to go! And the backing fabric is perfect.

I love a scrappy quilt and yours is so pretty!

Love it! The quilting is my favorite!!

Totally fab! I looove it!

beautiful!!! love it and love the quilting so much!

Scraptastic! I really like how it turned out - great little quilt to snuggle under, especially with that flannel on the back!

It turned out wonderful!

Absolutely lovely, Carla! I felt the same way that you did -- these blocks were so fun to make that it was hard to quit some nights!

Looks awesome! I love the quilting too!

Ok! Now this one is also on my list of favorite quilts! You're upsetting the balance......so many of my favorites are made by you!

What a fun quilt, Carla. It reminds me of the High Five blocks except that yours have more rounds. I love the fabric you chose for the back. It seems a perfect companion! (You work so fast!)

Your scraps look so good together. Your quilt turned out great.

Love it! Your colors are so pretty and that flannel was a great choice.

-7? Holy cow! I hope your beautiful quilt keeps you warm. :)

Love!!! You always make the most beautiful thing, even from scraps...

Carla your quilt is absolutely lovely. A brilliant way to use up the scraps and I think the grey blocks add a real "je ne sais quoi", a colour combination I would never have thought of. Very well done. Philippa xx

Hello Carla,
you know I love colors and so it´s clear that I absoutely love this beautiful quilt ☺ Great, great quilting too!
Liebe Grüße
Bente

LOVE the quilt! And all out of scraps? That's a gorgeous scrappy quilt - I think the gray just gives it that extra kick into "awesomeness!"

love the quilting...I will definitely have to "steal" the idea! your quilt is lovely!

Nat at Made in Home said...

Terrific quilt! I love the colors and the binding. Great quilting on it!

Super cute progress. I really like your nov blocks and your finished scrappy quilt.

It's such a happy quilt and I love the orange binding, it frames the colours nicely.